Mark Meuser is a native Californian with a proven record of fighting for your constitutional rights. From a young age, Mark was an entrepreneur. At age 12, he picked cherries in the morning and then operated a street-side cherry stand in the afternoon. He also worked hard at caring for orphaned animals, often bottle-feeding sheep, pigs, and cows. By age 15, he was in a management position at a local restaurant. By age 21, he purchased his own pizza restaurant.

While his restaurant business was thriving, Meuser started studying law. A few years later, he graduated with honors from Oak Brook College of Law. Meuser’s unique training has taught him how to listen to people, formulate creative alternatives, and achieve workable solutions to real problems.

As an attorney, Meuser secured an important victory for disabled Americans against United Airlines. In Gilstrap v. United Airlines, Meuser represented a disabled American injured by United when it failed to follow applicable federal law in how it handled her travel. The 9th Circuit agreed with Meuser that federal law permitted disabled Americans to sue airlines if those airlines failed to care for passengers as the law provided. In 2017, Meuser joined the Dhillon Law Group where he has focused on Election, Political, and Constitutional Law.

At Dhillon Law Group, he has had the privilege of protecting critical First Amendment rights, for example, by defending Troy Worden from a frivolous lawsuit brought against him by Yvette Felarca, a national organizer for the organization By Any Means Necessary, one of antifa’s front groups. Meuser was also involved in a lawsuit against Governor Gavin Newsom when California tried to remove President Trump’s name from the primary ballot by unconstitutionally changing the qualifications to run for President. Over the last year, Meuser has been involved in 22 lawsuits brought against Newsom for his unconstitutional usurpation of power as a result of COVID-19.

In his free time, Meuser loves being outdoors, enjoying California’s natural beauty. Whether he is hiking, bike riding, sailing, scuba diving, or snow skiing, Meuser is always quick to enjoy the diversity this state has to offer. Mark is currently a candidate for United States Senate. 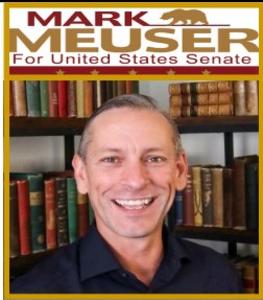